What are Free Flight Model Airplanes?

Free Flight modeling is the oldest form of aero-modeling and is still practiced all over the world. In Free Flight, once the model has been launched, the modeler has no control over it. All of the balance and trimming must have been done correctly beforehand. This is part of the intriguing challenge of Free Flight. 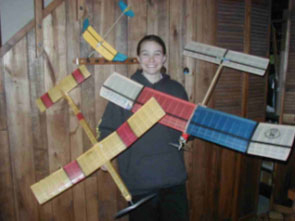 Free Flight is an excellent hobby for those who enjoy designing and/or building mechanical things. It teaches patience and persistence. It teaches mathematics, science, and engineering, as well as shop skills. Some types of Free Flight modeling, particularly the outdoor variety as described below, can be quite athletic.

There are two general categories of Free Flight: Indoor and Outdoor. Indoor models are very delicate and fly very slowly. Since they are not generally sturdy enough to be flown outdoors, they are usually flown in large gymnasiums. Outdoor models are of two general types: Scale models, which are near exact replicas of full sized airplanes; and endurance models, which are designed for maximum efficiency.

Outdoor Free Flight endurance models come in a variety of categories, but the goals of each are the same – fly as long as possible. Some people fly these models mainly for recreation, while others fly them competitively. The following paragraphs describe the different categories of competition endurance Free Flight models.

Gas Powered Models: These are airplanes powered by small propeller engines. In competition there are further sub categories based upon engine size, with the 1/2A class (for up to 0.049 cubic inch displacement engines) the smallest, to D class, the largest (these often have wingspans of over 8 feet!). The engines are only allowed to run for about 10 seconds, and then the airplane is virtually a glider. The flyers attempt to make 3 official flights, each of which will be timed for a maximum of three minutes (a “max” flight). This sounds like a very short time, but it usually cannot be achieved without the help of thermal updrafts.

Rubber Powered Models: These are airplanes powered by large rubber bands and have very large propellers which turn quite slowly compared to gas engine powered models. The propeller on such a model usually turns for about 30 seconds, and then the airplane is in the glide mode. The same three-minute flight rules mentioned above then apply.

Tow Line Gliders: These are large gliders, towed by a long line, into the air much like a kite. When the modeler senses a thermal, he can release the airplane from the line. The similar goal of three-minute flights also applies.

Hand Launched Gliders: These models are small balsa wood models that the modeler throws into the air. In this event, two-minute maximums are used and achieving a “max” in this event requires the help of thermals.

For more information on Free Flight and the MMM, please feel free to contact: themaxout@aol.com